Both Visual Studio 2013 and 2012 enable you to run JavaScript unit testing, and now with the Chutzpah test adapter, you can run code coverage as well. I recently added some tests to a Visual Studio (VS) 2013 solution that I was working on and was pleased to see that when I selected “Analyze Code Coverage for all Tests” in the Test Explorer, Visual Studio opens a nicely formatted html page that shows the JavaScript coverage.

I wanted to have that file available in my build results, too. Looking at the test results folder of the local VS test run, I saw that Chutzpah created an html file called “_Chutzpah.coverage.html”. I wanted that script to be copied to the drop folder of the build and to create a link in the build summary that you could then click to open it.

Fortunately, we can do this without even having to customize the build template – as long as we’re using the TfvcTemplate.12.xaml template, which is the default build template that ships with TFS 2013. This build template has some really useful script hooks, and luckily there’s one for running a post-test script. I knew I could easily copy the Chutzpah result file to the drop folder – no problem. But how do we add to the build summary report from a script that’s running “outside” the workflow? If we customize the workflow, we can use the WriteCustomSummaryInformation activity, but I wanted to do this without modifying the template.

After mailing the ChampsList, Jakob Ehn pointed me in the right direction – I needed to use the InformationNodeCoverters.AddCustomSummaryInformation method. Once I had that, the rest of the PowerShell script was almost trivial. I did hit one snag – I need the Team Project Collection URI for the script to work, but for some reason, the value of the TF_BUILD_COLLECTIONURI build environment variable was empty. Updating my build agent to VS 2013 Update 2 resolved this issue. Here’s the script:

# all is well with the world
Write-Host "Success!"
exit 0
}
catch {
Write-Error $_
exit 1
}
} else {
# let the build know there were no coverage files
Write-Warning "No Chutzpah coverage file detected"
exit 0
}

I saved this to my build scripts folder under source control and checked it in. Opening up the build definition, I had to create a second build run to run the JavaScript tests. Here are the settings I used: 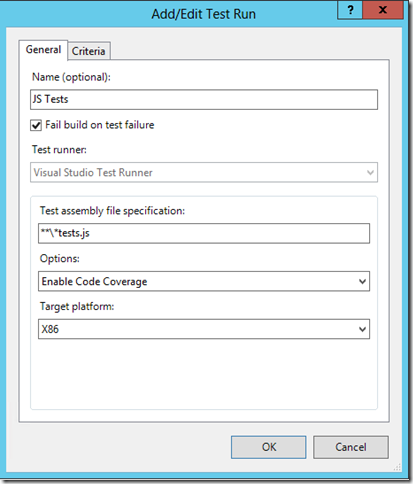 Note how I’ve enabled Code Coverage in the options dropdown. I added this folder to the source mappings for my build and then called the script in the post-test settings of the build:

Now when I run my build, I get a link to the JavaScript coverage file: 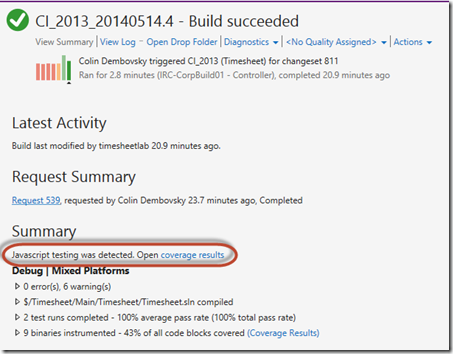 Clicking on the “coverage results” link opens the results page:

As a next project, I want to see if I can incorporate the coverage results into the build warehouse so that there’s metrics not only on .NET coverage over time, but also for JavaScript tests.